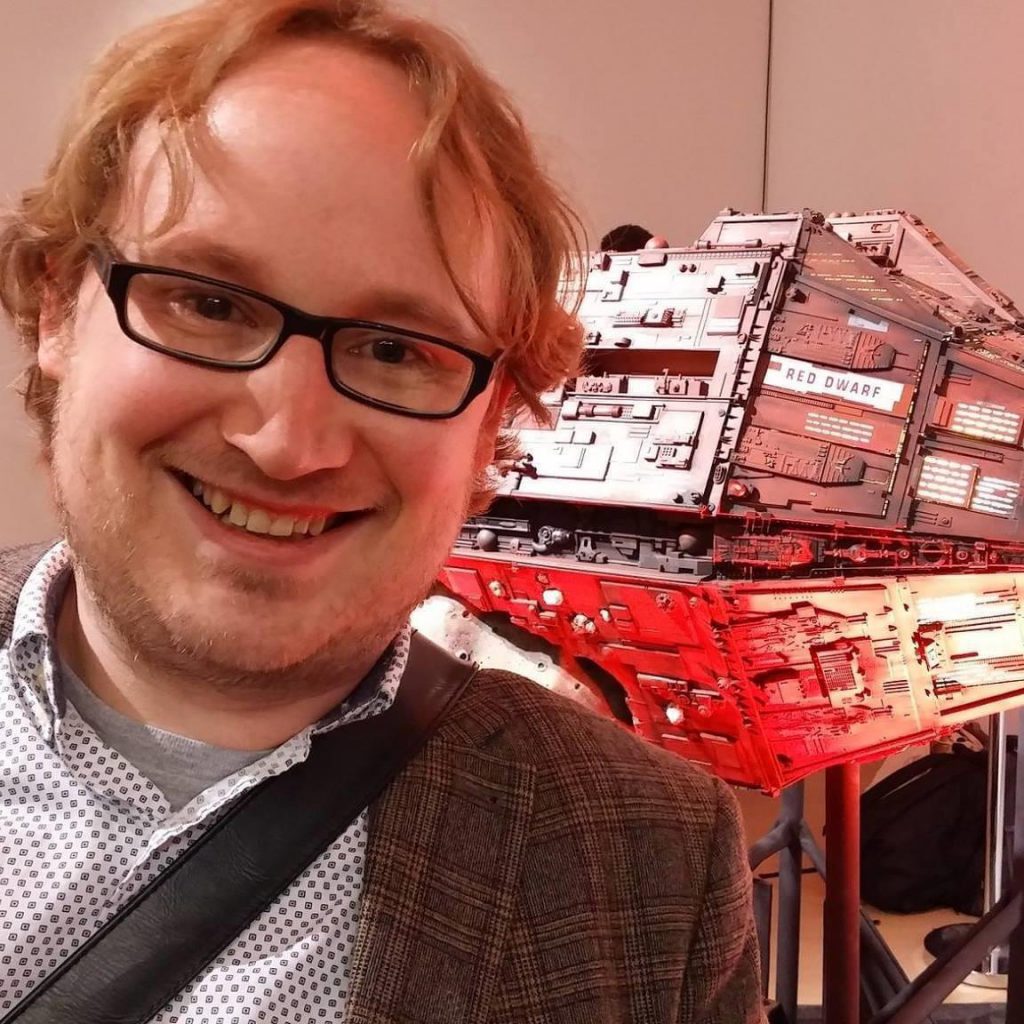 By now many of you will have heard of the devastating loss of Seb Patrick on the 2nd of August, aged just 37.

Seb was very well known in the Red Dwarf community, and even if you weren’t lucky enough to have known him personally, you’ll almost certainly be familiar with his work.

He was an original member of the prominent Red Dwarf fansite Ganymede & Titan, before his talent was duly spotted in 2011 by Grant Naylor Productions (GNP) and he became the Editor of the official Red Dwarf website and its social media accounts. From here, he kept the show’s global fanbase up-to-date through regular publication of exclusive content.

Seb was an invaluable link between GNP and the Fan Club, and was a munificent supporter of Dimension Jump: he gladly judged the costume competition alongside his wife Josephine; he eagerly took part in the Sunday afternoon quizzes, most recently as our expert Chaser in The Ace; and he was a regular participant in the Friday night karaoke, memorably belting out his self-penned parody of We Didn’t Start The Fire, ‘3 Million Years and Thirty’, and entertaining hundreds with his Fred “Love Shack” Schneider impression.

He was lined up to host part of the forthcoming DJ, and was so looking forward to getting up on stage once again. His love for Red Dwarf was clear and so generously shared, as anyone who enjoyed his work or had the pleasure to chat to him at DJ will know.

Seb had a plethora of interests outside of Red Dwarf and threw himself passionately into each and every one. He brightened every fandom he graced, cultivating positive communities and inspiring the budding passions of fellow fans. He wrote for Empire magazine, When Saturday Comes and Den of Geek. He co-created the UK’s first Kickstarter-funded sitcom, A Brief History of Time Travel. He hosted several podcasts and maintained an encyclopaedic knowledge on Formula 1, Liverpool FC, Roy of the Rovers, Doctor Who and The Office – to name but a few. All the while, and most of all, he was a devoted husband and a dedicated dad.

To many of the Fan Club team both past and present, Seb was a close friend. His vast knowledge of Red Dwarf was so impressive that it’d be all too easy to be intimidated were it not for the fact that he was a genuinely lovely and generous human being. As the Fan Club team has evolved over the years, Seb has been invariably warm and welcoming, taking the time to develop new friendships and share his expertise and enthusiasm for the small rouge one. He was modest, kind and funny.

The Fan Club team will miss Seb enormously and we extend our heartfelt condolences to all of his family and friends. If you’re able, please consider donating to this GoFundMe, set up by Seb’s friends to support his family at this painfully difficult time.